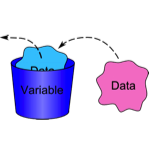 In this chapter you will learn:

Variable is nothing just a location in memory which keeps store data on it. All the programming language needs the help of variable to store data while processing or executing program. For example, when you do a simple job in program in which you need to add two numbers and show output, you need a memory location in which you could store the value before showing it on the console.

In the above pictorial example, when you initialize an integer variable to keep a numeric value in it, it allocates a memory location and store numeric value passed by program.

What is Data Type in Java?

Data Types is basically a term which defines which type of value is going to be stored in variable. For example if you define variable with integer data type it only holds numeric value in it.

How many data types are available in Java?

In this chapter you have learned what is variable and datatypes in java. You have also seen a complete example of java data types. In the next chapter you will learn about operators in Java.
Previous Lesson
Next Lesson